Every year we select one Ten10 Person of Year and support a charity they’re passionate about. Except this year – we’re supporting two charities!

Lana Aldridge, Academy Consultant here at Ten10, introduced us to Zarach. Zarach delivers beds and basics to children in poverty, combining essentials like bedding, toiletries, and clothing together into bundles that make a difference to over 2,600 people so far.

Lana received £2,500 and extra holiday to help Zarach, so we caught up with her to learn about the work she took part in and what that money was used for.

Zarach was founded in 2018 by a teacher called Bex Wilson. Bex was working in a primary school where she noticed one particular student falling behind and looking tired. After speaking with the boy after class and chatting with the mother, Bex realised that the family had no furniture in a new house they had moved into, apart from one garden chair and a bug infested cushion they had found. They didn’t have anything, or any support. This meant the boy hadn’t been sleeping due to the fact that he had no bed.

Why did you choose Zarach?

I heard about this charity through my church. Zarach kept being mentioned, but it was only briefly explained. I went home and spoke with my husband about what we could, or maybe even donate to help them. But even after donating it wasn’t enough, Zarach continued to be a name that was going around as the growing numbers of children without a bed grew.

Here in the UK, everyone should have a bed, and I was quite naive to the thought that some families don’t have one. Luckily, Bex came into church and explained her story. It was so touching hearing her story because that mother was able to support her kids more, herself and was able to find a job. She later came back and gave some money to Bex; so that Bex could go and help another family who needed it.

From there I wondered what it would be like for me to come home from work and not have a bed. You don’t think about it like that – a problem right on our doorstep. 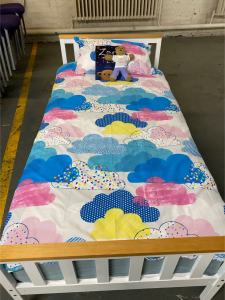 What did you do with your time at Zarach?

I came up to Leeds for a few days and met Amy on the first day. She looked after the volunteers and helped answer some questions I had. Amy also explained that through the money given to me by Ten10 it helped 17 families, providing a new bed and bundle for each child. I then met other volunteers at a food bank that Zarach helped with; where I was able to make crates and prepare food packages for people.

There were all kinds of people there, some working mothers however, with the current living crisis, they couldn’t support their families, but could go to this food bank to get more of what they needed. The council stopped this but Zarach decided to carry on as the numbers of families finding it difficult could get food. I also met the families I would be helping and chatted with them, as Zarach are also there for the community so there is always somebody to talk to, which was very touching. It was such an eye opener and I realised how I take things in my life for granted sometimes and learnt how I can continue helping.

On the second day of working with the charity, I worked in their warehouse to help sort the bedding and bundles that go out to the families. The incredible money given by Ten10 helped 17 families and it felt so rewarding. On the last day, I went out with Amy to other companies who had donated money and wanted to continue to work with Zarach. I was able to understand their ideas on how to get involved and help Zarach. The time I spent with them was incredible, and I’m so glad that I did it.

Do you know what you managed to provide to these families with the Ten10 money?

With the money given to the 17 families, each child was able to be given brand new full bed bundle, that includes a bed, a mattress, a mattress protector, duvet and pillow set, set of pyjamas, toiletries which includes female products, toothbrushes, toothpaste, shampoo and soaps, a book and a hand made knitted teddy. 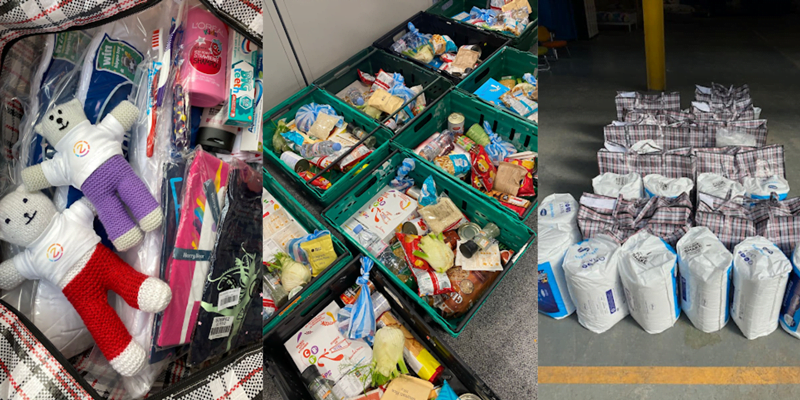 What can we as Ten10 do to continue to help out this charity?

There are many ways we can all help Zarach to stop child bed poverty; such as, volunteering some time to help individually or as a company, cash donations and donating food or products. I want to continue to support Zarach, by sharing updates, creating donation boxes and volunteering my time when I can and I hope Ten10 will support me through this.

Zarach has also opened a site in Romford and Dewsbury to help families in other parts of the UK other than Leeds. 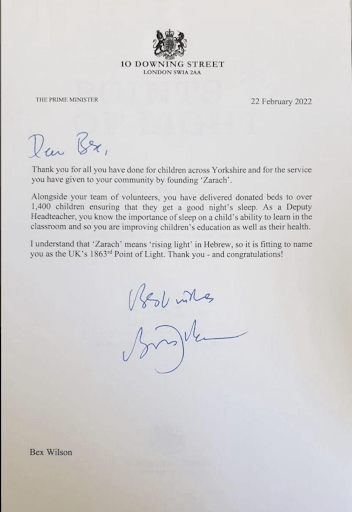 We’re delighted to hear from Lana about such a worthy cause which has been recognised by none other than the Prime Minister.

To support Zarach in its mission to “give every head a bed”, donate anything you can and help children living in poverty.