Client:
A leader in digital patient engagement and data capture

The client is a global data and technology company that minimises risk and uncertainty in clinical trials so that you can move ahead quickly – and with confidence. It has 50 years’ of combined clinical, therapeutic and regulatory experience as well as technology and process-related expertise. It has locations in North America, Europe and Asia.

The client was creating a support service on behalf of a global pharmaceutical company, aimed at patients diagnosed with chronic obstructive pulmonary disease or asthma and who were using a particular inhaler. The service was designed to capture usage of the inhaler electronically so that patients could be reminded of the need to use the device and so that medical professionals could monitor usage remotely in order to provide the right support at the right time.

At the point when Ten10 became involved, the project to develop systems that would capture the data was two years old, progress had slowed and the test strategy had become outdated. Ten10 was called in to develop a new testing methodology and help find faults.

The goals for Ten10’s intervention were clear. We needed to use our long-proven testing tools and techniques to resolve the issues around a lack of end-to-end testing, fix the problem of the unreliable activation and work to strict deadlines in order to launch the service in three countries, consecutively. In addition, we planned to run regression tests on all areas of the product to ensure that each change had not introduced new bugs; all the while communicating the required fixes and processes to both the client and the outsourced developers.

The challenges being faced by the client were varied. Apart from a new project manager being appointed four weeks into testing, which had an impact as he got up to speed, the system was being rolled out in three countries.

One of those three countries was France, where it is mandatory for personal medical data to remain inside the country and for security procedures more stringent than just username and password to be adopted; in this case, two-factor authentication in the form of a one-time password texted to the user was adopted.

In addition, the scripts initially being used to test the service did not stress all elements of the system, namely the inhaler, the mobile application and the portal and activation of the system had long been unreliable, for reasons that the client had not been able to uncover. Product development was also being hampered by being split between in-house and outsourced development teams.

Consequently, the pharmaceutical company had been unable to take delivery of a functional, demonstrable service, to market to potential buyers.

The client’s service encompassed a number of technological disciplines. Components included Bluetooth for initial connectivity, a database back-end, a portal, the application itself and connectivity between the components. 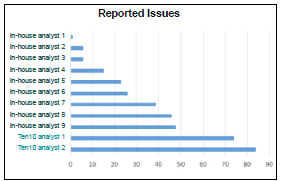 Using a holistic, risk-based, exploratory approach that embraced a range of technologies, such as traffic interception tools and regression testing with every aspect of the service in use, Ten10 was able to discover where subsystems were failing, speed up the project and enhance communication across a number of teams. By testing every aspect of the system both individually and together, logging the connections and communicating failures and other issues to the client’s project manager, Ten10 also uncovered defects not found by the previous test team. 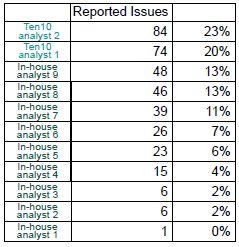 Not only did our testing enable the successful delivery of the service to the end client, but it also gave confidence that its service could be demonstrated successfully to its customers and therefore gain market traction. So successful was this approach that the client engaged Ten10 on another project.